‘The Politician’ Is Peak Ryan Murphy 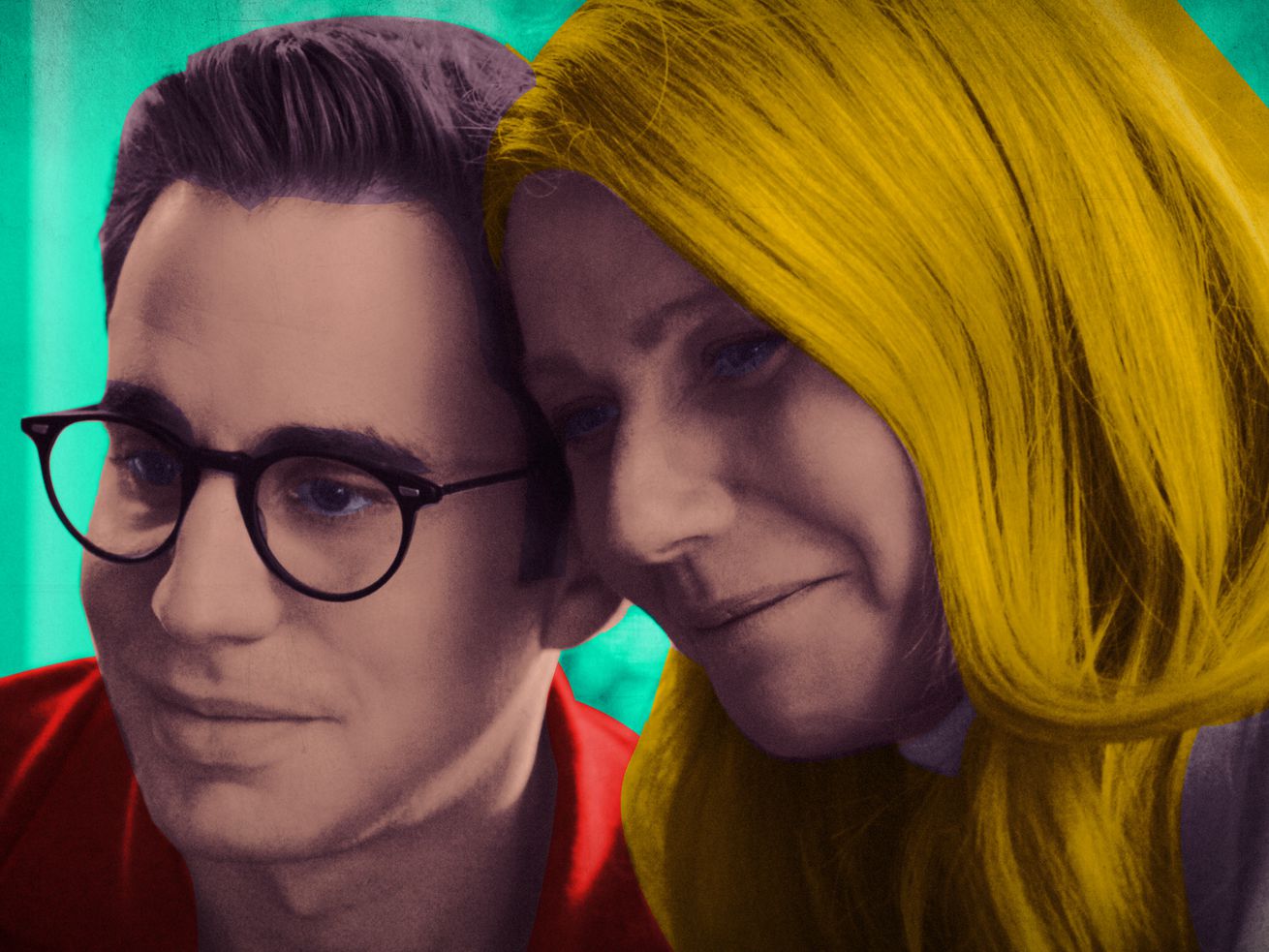 If ‘The Politician’ is any indication, Netflix paid Ryan Murphy $300 million for more of the same—not to push in a new direction

It’s a good week to be Ryan Murphy. On Sunday, Billy Porter picked up a surprise Emmy for his performance as an ’80s-era ball MC on Pose, Murphy’s final new creation in a decade-long partnership with cable channel FX and affiliated studio 20th Century Fox Television. And in the middle of Porter’s rousing speech, the auteur was singled out, more than once: “Ryan Murphy, Ryan Murphy, Ryan Murphy!” Porter exclaimed, to thunderous applause. Little elaboration was needed. In recent years, the power-producer has taken to delegating key tasks within his sprawling empire: the scripts for prestige anthology series Feud and American Crime Story; showrunning duties for hit network procedural 9-1-1. But for Pose, a heartwarming story of found family with a history-making cast of largely trans and nonwhite actors, Murphy resumed a more hands-on role, directing and writing as well as producing. His part in Porter’s win was more than that of a patron.

On Friday, Murphy will unveil the next phase in his thus-far-successful plan for world domination. The Politician marks the first tangible product of Murphy’s nine-figure deal with Netflix, a pact that cements both creator and streaming service as dominant forces in their industry. Murphy’s Netflix portfolio will soon grow to include Ratched, a One Flew Over the Cuckoo’s Nest spinoff starring Sarah Paulson, and Hollywood, a period piece starring Darren Criss. As the first show out of the gate, however, The Politician carries the burden of showing what this latest chapter in a career that’s already reshaped much of modern television will actually look like. The IMDb page, at least, has already thrown down the gauntlet. To Murphy’s regular repertory of players like Jessica Lange and Dylan McDermott, The Politician adds Tony-winning wunderkind (and Beanie Feldstein bestie) Ben Platt as well as Gwyneth Paltrow, who happens to be married to series cocreator and longtime Murphy collaborator Brad Falchuk.

You couldn’t ask for better optics: a crowning achievement for one flank of the Murphy-verse segueing seamlessly into the launch of another. FX gets the assurance that it still controls several critically and commercially successful properties; the network recently finished airing the second season of Pose, which will be eligible for next year’s Emmys, and retains ongoing series like Feud, American Crime Story, and American Horror Story, which kicked off its slasher-themed ninth season last week. Meanwhile, Murphy and Netflix get a welcome boost to their momentum—and even a movie-star-fronted, streaming-distributed new show can use all the momentum it can get these days.

But for all the justified fanfare surrounding its release, The Politician neglects to match its budgetary or business ambition with the creative kind. Whatever one thinks about his provocative, flagrantly uneven style, Murphy’s CV is punctuated with benchmarks that moved the medium itself forward along with his career. Glee injected a camp outrageousness into once-fusty network TV that lives on in successors like Riverdale; American Horror Story single-handedly put the seasonal anthology into vogue, enabling the related trend of film stars trickling into TV; Pose set a new bar for representation, both in front of and behind the camera. (Along with Murphy, Pose’s writers’ room includes Transparent alumna Our Lady J and trans activist Janet Mock, who has also directed several episodes.) The Politician’s eight-episode first season gives no indication it will become so influential. The show successfully integrates Murphy into Netflix’s self-contained universe, but true to its home, it feels more like an algorithmically generated collage of Murphy tropes than a meaningful evolution of the creator’s sensibility.

The Politician’s titular character is Platt’s Payton Hobart, a wealthy Santa Barbara teenager whose master plan to win the presidency—as in, of the United States of America—starts with the race to head up his elite private school’s student council. Right away, the Murphy déjà vu kicks in. Like Glee’s Rachel Berry, Payton is relentlessly driven, unctuously ingratiating, and paradoxically beholden to both his self-interest and his ideals. And like Murphy’s more recent efforts, Payton’s journey over the years will be structured as an anthology, with each season following a different election over the course of Payton’s (presumably long) career. In both structure and setting, Murphy has reverted to old standbys.

Murphy’s own work isn’t his only source of inspiration. As a character, Payton reads like a cross between Election’s Tracy Flick (minus the class rage) and Rushmore’s Max Fischer (plus a perfect GPA). The maniacally overachieving high-schooler is a well-established figure in American popular culture, and apart from his ambiguous sexuality, Payton doesn’t add much to the archetype. The Politician’s primary subplot, too, is strikingly derivative. Payton’s choice of running mate, the terminally ill Infinity (Zoey Deutch), turns out to be a victim of her grandmother’s Munchausen by proxy. With her high-pitched voice, pink cap, and bad-news boyfriend she turns to for help, Infinity is clearly modeled after Gypsy Rose Blanchard, the young Missouri woman whose story was popularized in a 2016 BuzzFeed article as well as the Hulu series The Act. Patricia Arquette even took home an Emmy for portraying Gypsy’s mother, Dee Dee, from the same ceremony that went on to honor Porter. Ripping from the headlines is a time-tested tool of TV plotting—a tool Murphy is fond of employing—but using such unoriginal source material to flesh out his highest-profile premiere in years is a disappointing show of complacency.

One of The Politician’s few would-be additions to Murphy’s toolbox is regrettably ill-suited to his talents. As the title suggests, The Politician is a character study, or maybe an allegory with character study as a means to its end. The opening credits pan over the rigidly divided compartments that make up, it’s implied, whatever Payton has in place of a soul: diplomas, school supplies, medals and trophies. A wooden, Payton-shaped mannequin then snaps shut, before a thin coat of paint washes over to create what looks and sounds like a real boy, but with a Harvard pin where his heart should be. The impression is that of a study in absolute, near-sociopathic ambition, an entire adolescence reverse-engineered from some far-off goal and unsullied by ideology. Payton is adopted, and his own mother, Georgina (Paltrow), admits his resolve frightens her, hinting at an uncanny alien who happened to land into immense privilege.

But as even Murphy apologists know, the nuances of character are often at odds with his flair for sensational plot. The Politician never commits enough to an angle on Payton for the audience to truly get a sense of him. He’s unscrupulous enough to forge ahead even after he learns Infinity’s illness is fake, yet principled enough to insist he earn his college admissions on merit alone. He’s off-putting in that try-hard, Kendall Roy sort of way, yet also inspires a confounding level of devotion in his minions. Such inconsistency is hardly unique to Payton; per the rules of soap opera storytelling, characters declare their love for their children in one scene and disown them entirely the next, as the need for conflict demands. But it takes the greatest toll on him, and on the show. An often-scathing satire of the rich, striving, identity-politics-obsessed, and easily manipulated, The Politician has unambiguous contempt for most of its characters. Strangely, it’s only gun-shy when it comes to Payton, who comes off as a confused jumble of naive incrementalist and Machiavellian schemer, messianic demagogue and hollow shell.

The haziness of its central figure means The Politician doesn’t have much to say about, well, politics. As attempts from Who Is America? to Succession have shown, the time is certainly ripe for explorations of who holds power in this country and what motivates their actions—or rather, doesn’t, when it comes to morals or a conscience. But Payton conforms to a now-dated idea of what the quintessential politician even is. Payton is obsessed with the biographies of onetime presidents, from the institutions they attended to the offices they held on the way to the White House. There’s one very big exception to his roster of idols, though—a glaring omission for a person we’re told has an all-consuming interest in the pathways to power. Elsewhere, Payton’s opponent could be a useful foil, showing how irrelevant conventional résumé-building has become to modern electioneering. Instead, The Politician casts Astrid (Lucy Boynton), another beneficiary of generational wealth who wants the title for the wrong reasons. The opportunity for contrast is lost. Payton may invoke a familiar figure, but The Politician declines to update its imagery for a more anarchic, even more nihilist phase of the American experiment.

In many ways, The Politician is the visible result of a blank check. Production is split between Southern California and New York, complete with no-expenses-spared locations like Union Station and Times Square. Paltrow and Platt lead the cast, but small supporting roles are filled with the likes of January Jones, Jackie Hoffman, and even Bette Midler, who the finale sets up to play a far more substantive part in the next season. Still, The Politician takes far fewer narrative swings than financial ones. Murphy is just the first of many recipients of massive overall deals, a spending spree that also swept up Kenya Barris, Shonda Rhimes, and Jenji Kohan. What The Politician suggests is that Netflix may be looking for these showrunners to re-create their signatures behind its paywall, not push them in a new direction.

The NBA’s tampering fix looked doomed to fail. What now?