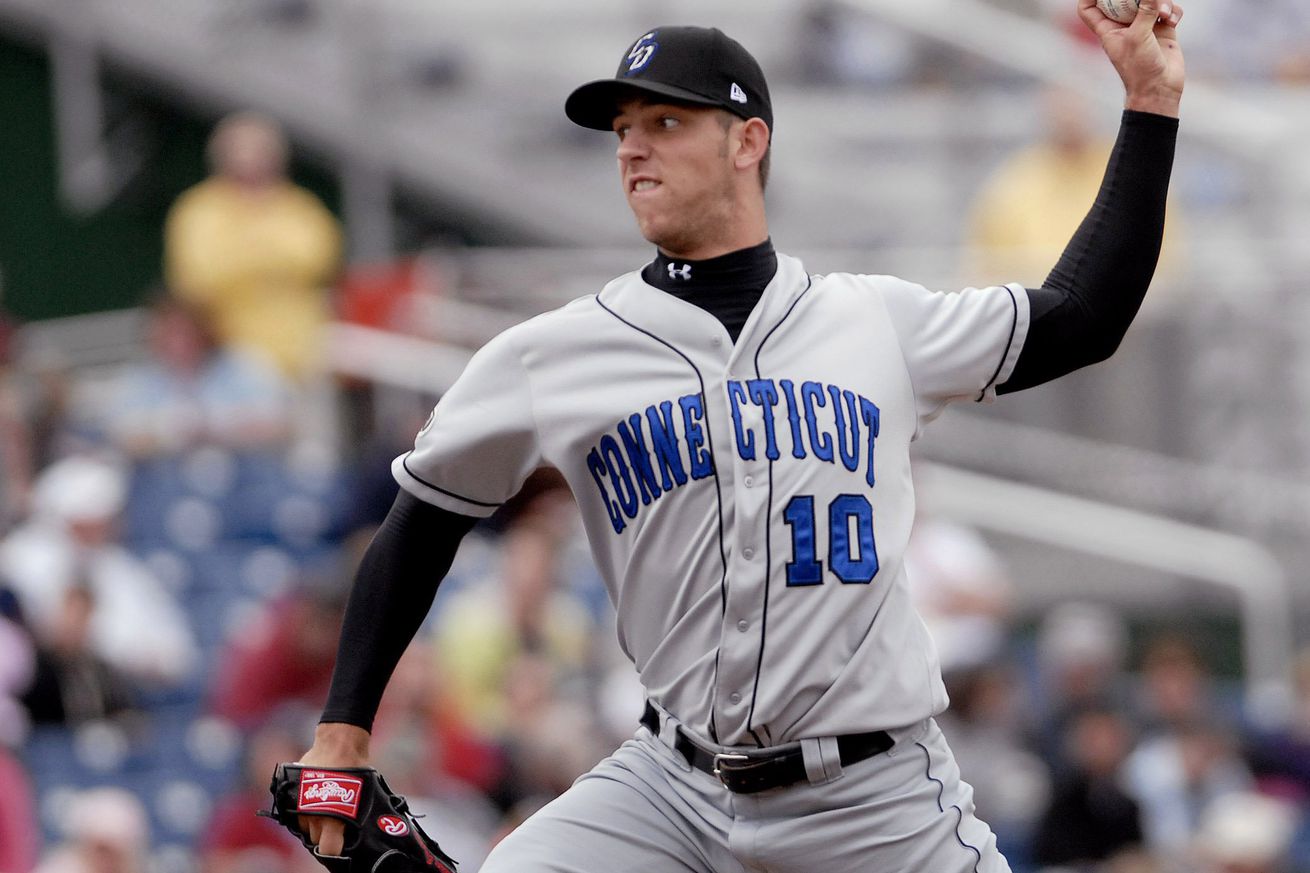 It wasn’t his best but it might have been his most interesting.

I only ever saw Madison Bumgarner once as minor leaguer and it was probably — no, definitely — the worst start of his prospect career. It was this start in fact, a start that ended up igniting a firestorm of “Bum is broken” fear, thanks to a (long since deleted) Kevin Goldstein tweet that said:

“Panic on the streets of San Fran: Giants LHP Madison Bumgarner gets pummeled, sits in the upper 80s.”

And panic it was! Just check the Fanshot — no, nobody ever understood the difference — that appeared the next day on this here blog. I wrote a pretty long comment in that post so you can read it if you want the full version, but the short version is he was hit hard with subpar stuff, and was thrown out of the game in the 2nd inning after a few angry and frustrated purpose pitches (yes, the 19 year old fully earned the MadBum sobriquet as he would continue to do to this day). Indeed, his head-hunting ways ended up being one of the most positive takeaways of the night for this observer.

Seems Madison has a nasty streak, which I kinda like.

But it was hard to know what to make of the rest of it. I spent the summer anticipating this... this 10 batters of work? The sense of letdown was hard to keep at bay. It was distracting! Until I looked up the box score I had zero recollection of Brandon Crawford’s 4-hit game, possibly the best performance of his AA career.

After having posted one of the most dominating minor league seasons of the century as an 18 year old in Augusta, he received this glittering report in the Prospect Handbook:

Early efforts to smooth out his mechanics were a failure, as he allowed 10 runs over 11 2/3 innings in his first three starts. Then the big, strong lefthander went back to his high school delivery and was untouchable, posting a 0.90 ERA in his final 21 regular season outings before allowing just one unearned run in two playoff starts as the GreenJackets won the South Atlantic League title. Bumgarner’s overall 1.46 ERA was the lowest in the minors, and he struck out an unreal 7.8 batters for every walk. There may not be a lefthander with a better fastball than Bumgarner’s. He hits 97 mph with minimal effort, consistently pitches at 93-94

I couldn’t wait to see this flamethrowing harbinger of a glorious future! The 19-year old started 2009 in San Jose but was there less than a month before heading to AA, which at that time meant the Connecticut Defenders. I quickly checked the schedule and marked their first trip to the mid-Atlantic on my calendar — nearly three months later. “Maybe Buster would be up by then, too!” I thought. By the time the Defenders finally came to town, Posey had skipped AA entirely, so my entire focus was on the country-strong lefthander.

And then... this? There was no easy 97. There was not much 90-anything. Nothing was easy. I had panicky flashbacks to seeing Jesse Foppert throwing 91 in spring training in 2003, after having caught him in the Texas League the year before burning a smooth and easy 98.

Here was Bum throwing 88, 89... making it up to 91 just once. Beyond the fastball, there was no sign of a curve or a change, and only the slightest indication of something that might be a nascent slider but which in retrospect was almost certainly the famous cutter. None of it seemed to find the corners and all of it got hit. This was it? This was the guy?

It seemed bad. Was it bad? It certainly seemed bad. I talked with a scout in a nearby seat who admitted to having seen Bum throwing 7-10 mph harder a year earlier. But he cautioned again over-reaction, saying he wasn’t that worried. “You can see there’s more in there” was how he put it. I tried to digest and absorb his calm, unperturbed optimism on young MadBum’s future. Would what I had seen really play in the majors? Was there more in there and when would it come out and play?

The panic of Bumgarner’s lost velocity would last through his major league debut at the end of that same year and all the way into and through the following spring training. And not just among Giants fans. Bumgarner dropped from 9 to 14 on the BA Top 100 that next spring. But ultimately — whether it was a mechanical change, some physical maturation, or a change in his throwing regimen — the stuff that would make him a franchise great would return and the rest was history.

In retrospect, big props should go to long-time McCoven prospect follower Fla-Giant for making an amazing observation in that week of panic and dismay:

there’s an obvious and pleasantly surprising conclusion to be drawn. MadBum’s FB must be even more ++ than we ever thought. He was able to sustain the results (except for K rates) that he had in his amazing season last year, all the while losing 3-4 mph on his pitches – while moving up 2 levels to a very prospect-stacked AA league! Think of it, the hitters he faced this year knew he was going to throw them the FB at least 8 out of 10 times, and that it was only going to be coming in around 91, and they still couldn’t hit it (until last night when his velocity dropped to 88-89 and he had no control).

That view was very similar the same one that Baseball America editor John Manuel would make in arguments to keep Bumgarner in BA’s top 10. A teenager (mostly) holding AA hitters to a 1.93 ERA with a mediocre fastball ended up being a better indication of future success than any wild child’s 98 could ever be.

Oh, and my disappointment at having caught the young Bum at his worst, rather than at his best? I got over it in time...